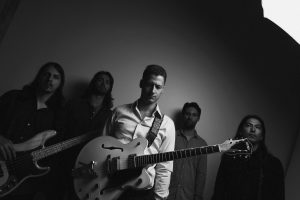 Cale and the Gravity Well formed in late 2015, mostly as the result of a joke. Cale’s sister Zoe had earlier opined that she was thinking of starting a record label, and Cale, with all the certainty of a lifelong skeptic, declared that he would join it. His first album, the Age of Envy, was released not even a year later, in May 2015, to favorable reviews. Music Existence called it “…every bit as magical as it is thought-provoking,” Cougar Microbes said “It’s almost impossible not to find yourself singing along,” and AudioFuzz named the band “one of the most intriguing names in music.”

Since the release, Cale and the Gravity Well have gone on to become veterans of the club scene in their hometown of New York, gigging regularly in such storied venues as The Bitter End and The Bowery Electric. Their lineup has grown to five, with full time members including Jake Chapman, Brian Duke, Anthony Surace, and Yutaka Takahashi. Recently the band has overtaken the festival circuit, with performances at Bonanza Campout in Heber City, Utah, Aspen’s JAS Labor Day Fest, an unofficial showcase at SXSW, and two performances at the Formula 1 Grand Prix in Singapore.

As a band, Cale and the Gravity Well is known for innovative lyrics, hypnotic melodies, and vocals that are off-and-on soothing and scathing, blending a wide variety of musical sub genres, from folk-pop to indie rock and electronica, for a sound completely unlike any other in the business today.

Or, as Cale once said, “like CCR with existential dread.”